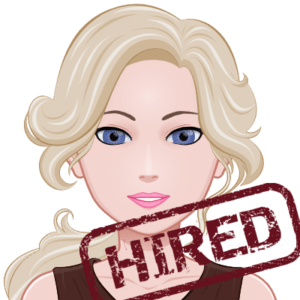 Senior UI/UX Designer, lead the creation of user experience and visual design deliverables and ensuring strategic alignment throughout the design and execution process.

Interview Notes: Recently moved into a Lead role… that has been awesome but the company is so small that she has maxed out the potential for growth… so now she’s passively open to hearing about new things… but it has to be the right role… not a desperate search… wants to be with a company that is open to growth… now that she’s in a Lead role she’s more involved in strategy on the projects from the beginning… working with stakeholders from the beginning to define what they need to be successful… then moving forward and executing it…. enjoys that…. has been able to also work on some internal products this year, one of which is the “Share” application, you can see it on her portfolio, that’s a product they developed after working through some issues for a client, at a broadcast news agency, so they went in and were able to build out that product and that gave her the first opportunity to work on a very targeted experience that would fit a number of different clients…. previously was working on apps and things for clients that were more one-off projects…. Internally there is no team… very small company…  as they work with customer/client, that’s where the team happens, so for example, she is working on a project now with a hospitality timeshare company…. they began to build an app that would allow for their timeshare owners to make payments and save credit cards, have a  “utility” side with payment gateway, but also have the app function as a marketing opportunity to reach customers that they don’t see in person….. started project internally but their team was not familiar enough with mobile to do it successfully, so she went in and figured out how to work with what they’d already built, and work with their existing dev team, and established a design system and language for use across the app system, and worked with her team and their team to finish the project…. so she goes in as a consulting layer and working with client teams….enjoys both UI and UX…. has a strong background in visual design and that’s how she moved into the UI/UX world… background is in packaging and print design…. worked her way over to UI/UX…. truly comes at it from both sides… ideally wants to be able to have input on both…. if she HAD to choose one, she’d choose UX because she does like the evidence-driven work on projects, but again, stressed that she’s in a role where she does both and prefers to do both…Agile…Most recently 2 weeks sprints.